We call for a week of solidarity with the squatted, liberated ground of Biologica Squat from the 10th to the 17th of January 2022. We call for this week to be another reason for revolutionaries, individuals and collectives in Greece, Europe and throughout the whole world to show their solidarity by all means possible, with evert way that they consider as suitable for the 34 years of the liberated grounds of Biologica Squat which is now under the threat of eviction. Every eviction has its price. Prepare, beware, solidarity is our weapon.

Hands off the Biologic squat!

On Thursday 18th of November 2021, we noticed some "changes" inside the Biological building and more specific inside the foyer area, from the installation of plasterboard that blocked half of the space by leaving behind a corridor between the two entrances of the building. They even had the audacity to leave some distinct marks on walls, including the wall of the squat by foreshadowing their demolition.

After a related research in the Ministry of Digital Governance and in the "Diaygeia" Programme (online platform from the government), we noticed that on the 16th of September 2021, a construction was assigned, for a project of 1.320.600,00 euros, with the subject: "INTERNAL SPACE LAYOUT OF THE BIOLOGY DEPARTMENT GROUND FLOOR , FOR THE NEEDS OF S.O.S. (School of Sciences, neighborhood building)". Their timeline require that the specific project must be delivered within 16 months since its publication - from the signing of the agreement and their plans it is clear that they intend to transform the squatted area into a "waiting room", something "highly necessary" for the school's operation. Indeed, it appears from the agreement that the demolition of the walls is scheduled to take place within 4 months of its signing (i.e. by mid-January), which the threat of eviction becomes direct. Already university rectors and developers took action for the reconfiguration of the "utilitarian" spaces and their completion.

Abstract from the collective text of Biologic squat

The Biologic squat, being a consistent space of resistance for the last 34 years inside the university's campus of the Aristotle University of Thessaloniki (AUTH), has hosted a number of groups, individuals, ideas and actions which don't get limited by borders, bars and fences. Currently, the squat provides spaces for the squat Terra Incognita, the Solidarity Fund for Prisoners and Persecuted Fighters, the Biologica which they coordinate through the political administrative assembly of the self-organised space. Apart from the activity of groups and collectives, various initiatives of individuals are carried out in the place, which aim at the diffusion of ideas and propaganda through counter-information tools, self-education and "fermentation" with topics which concern both student struggles and the broader social struggles within and outside the metropolitan field.

This overall activity of the space stands as an obstacle at the dominant normality of the doctrine "peace-order-security" and that disturbs the state's apparatus which launches an all-out attack. Evictions of self-organised spaces and squats were happening since forever within the history of the anarchist and radical movements, therefore in the last period we recognise an escalation in the effort to repress the voice of encouragement of the resistance and the mobilisation on the side of the democratic government of Mitsotakis. With the tools of criminalizing and targeting the resisting spaces and individuals, attacks directly the structures of the university's space in order to gain the absolute control and to achieve its plans of gentrification and the broader social control. From the squats evictions of the university's property, Terra Incognita, Rosa Nera, Vankuver Apartman, the self-organised space of A.S.O.E.E, the raids in F.E.P.A and the extensive damages on the squatted political spaces, the future hiring of "special" security guards, the placement of the drug mafias inside the universities, until the recent parody of DNA mixture and the prosecution of the 14 militants from the occupied Rectory of NTUA in Athens.

The occupied space of Biologic because of its position inside the university, is a fixed reference point and an integral part of practical support and solidarity to student struggles against the anti-educational bill of Kerameos-Chrissochoidis (Law 4777/2021), the overall restructuring of education and the creation of the university police force. This bill which was voted overnight in the middle of the pandemic, it concerns the minimum enrollment base, student removals, disciplinary as well as the controlled entry to universities. With this law as a pretext the way opens for the de facto abolition of the university asylum and the prevalence of total control, surveillance and the exclusion of political activities and projects from the university community. An attempt to sterilize and depoliticize the past and present struggles emerging from the universities through the recent legal abolition of university asylum.

The state-capital collaboration would really like us to remain silent but we have other intentions for their repressive and gentrification plans. Through political procedures we oppose repression and we propose self-organisation and solidarity at both local and international level. In this context we have formed an open solidarity assembly against the threat of eviction of the Biologic squat. Collectives and individuals, we choose to defend the Biologic squat both politically and socially as well as emotionally, since for us it is an integral meeting point with events, solidarity structures and struggles. Through this particular procedure we will try to stand as an obstacle to coming attack and collectively prevent it.

Not a single step back, 34 years are not enough

No threat of the state will remain unanswered

Solidarity with the squats and the student struggles

Open assembly for the defense of the Biologic squat 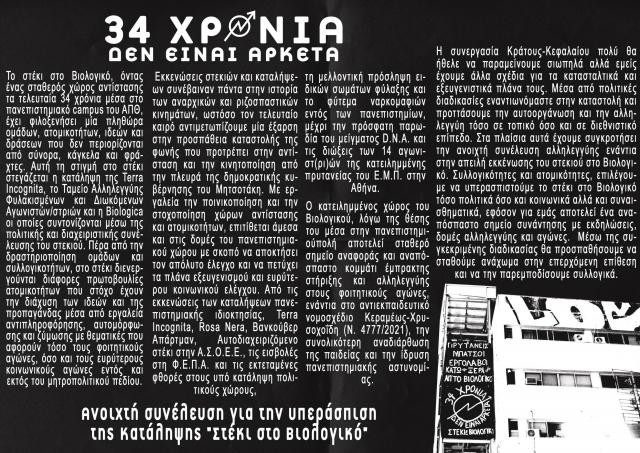